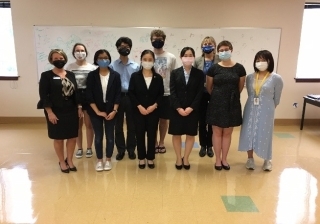 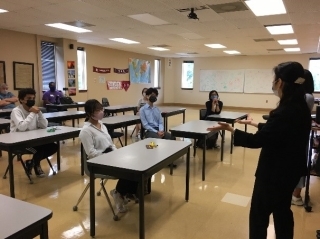 On October 14th, Consul General FUKUSHIMA Kayoko visited the Arkansas School for Math, Science, and the Arts, which is the only public school in the state that provides local Japanese language instruction, and met with 7 high school students who are studying Japanese. ASMSA was established with the support from former president Bill Clinton and Mrs. Clinton during the time when the former president was Governor of Arkansas. Currently, a Japanese assistant teacher instructs the Japanese class through a partnership between The Japan Foundation and Laurasian Institution. During the Consul General’s visit, students expressed their enthusiasm for learning Japanese. Consul-General Fukushima explained the work of our consulate in the five jurisdiction states and shared aspects of life in the U.S. that interest her and memories that inspired her to go abroad for study and work. This interaction provided an opportunity to strengthen mutual understanding about the utilization of Japanese language for the students’ future career building in global society.