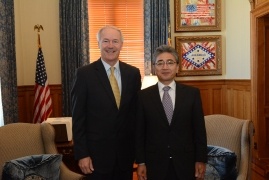 Consul-General Kinefuchi conveyed his intention to work together with the Governor in order to strengthen the economic partnership between Japan and Arkansas. He then introduced that the City of Hot Springs where he visited the day before has been engaged with active sister city exchanges with Hanamaki, Japan, for more than 20 years, and asked for the Governor’s support for further cultural exchanges between Japan and Arkansas.

Governor Hutchinson said that he wanted to make Arkansas better known by Japanese people and further promote relations between Japan Arkansas along with Consul-General Kinefuchi.