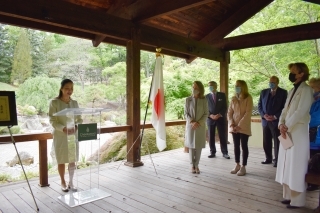 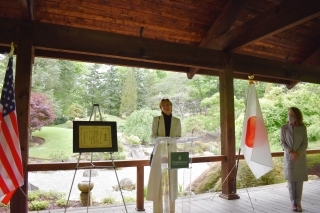 On Monday, May 10th, Consul-General Fukushima conferred the Foreign Minister’s Commendation on Cheekwood Estate and Gardens at the Blevins Japanese Garden “Shomu-en”.
Consul-General Fukushima praised the tireless efforts of the members of Cheekwood for hosting Japanese cultural events to promote mutual understanding between Japan and the United States. Ms. Jane McLead, CEO of Cheekwood, stated that it was an honor to be awarded the commendation, praised the support of the Cheekwood board members and staffs, including opening the Blevins Japanese Garden, and thanked Japan for funding the renovation of the Blevins Japanese Garden by Ministry of Land, Infrastructure, Transport, and Tourism (MILT) of Japan, and cooperation extended to the Japan-related activities of the Cheekwood.