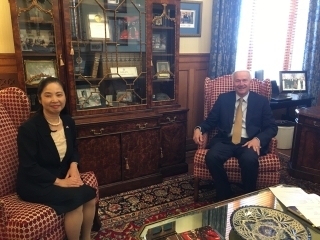 On October 13th, Consul General FUKUSHIMA Kayoko paid a courtesy call on Honorable Asa Hutchinson, Governor of Arkansas, at the State Capitol. Consul General Fukushima offered her congratulations on his appointment to chairman of the National Governors Association and conveyed her gratitude to Governor Hutchinson for attaching importance to relations with Japan including the economic field and support for Japanese residents and Japan-affiliated companies. Governor Hutchinson emphasized that business relationships with Japan-affiliated companies is very important to Arkansas and that he hopes even more companies will come to the state.