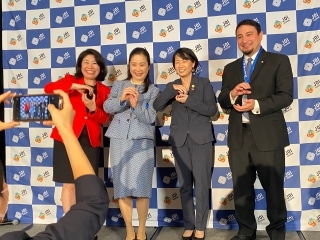 On Friday, October 28th, Consul-General Fukushima took part in a panel discussion titled “Japan in the South; Bringing Japan and the U.S. closer by facilitating community and grassroots interchange and interaction”, organized as part of the Japan Outreach Initiative (JOI) Program 20th anniversary event hosted by the Japan Foundation and Laurasian Institution. Consul-General Fukushima discussed the relationship between Japan and the 5 state area of the Consulate’s jurisdiction, grassroots exchange activities and their meaning and importance, how JOI coordinators are contributing in their communities and so on. Many current and past JOI coordinators attended the event and the development and the history of the JOI Program was demonstrated at the event.